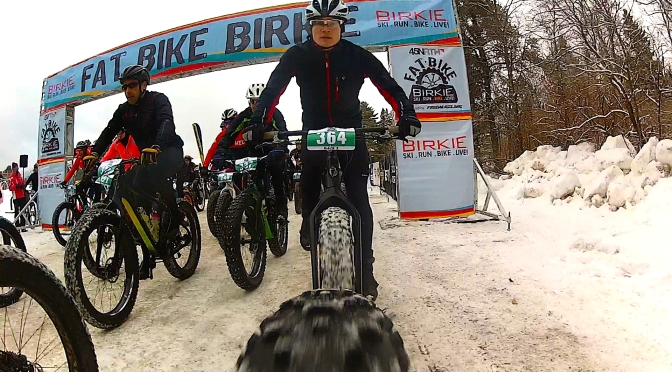 WOW!  Can the Fat Bike Birkie Race get any Bigger and Better?

Well, this year’s 2016 version was all that and more than the great race I have enjoyed the last two years! It wasn’t just that it has grown to over 1000 racers … the whole weekend experience was enhanced by the new Start/Finish location and venue right in the heart of Cable, Wisconsin, USA.  The locale created a fun ‘carnival’ atmosphere, allowed for more sponsors space (wow – do they have a ton of sponsors – Fat Biking continues to explode!), access to local businesses and a seriously long straight racers line-up and roll out … 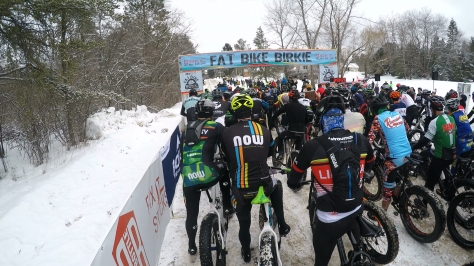 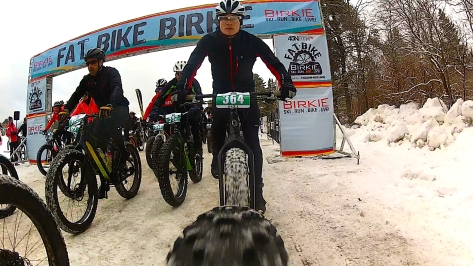 While we racers were all a bit nervous about the roll-out road conditions (very icy on the pre-race day), it all turned out well thanks to 3 inches of fresh snow that night and lots of sanding (thanks American Birkebeiner Ski Foundation staff and volunteers).

The actual Birkie trail conditions were near perfect this year, but big lugged tires (like my Surly Bud/Lou combo) gave excellent control on fast downhills/corners and the traction you needed to stay on your bike on the steep climbs … 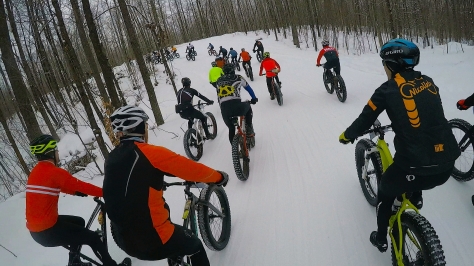 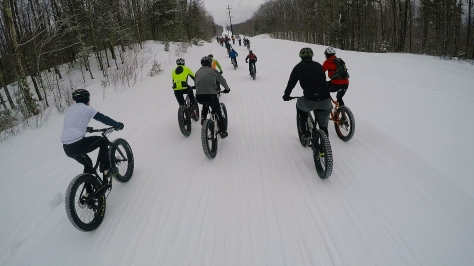 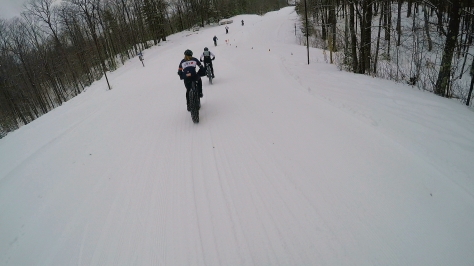 I enjoyed the ride and all the characters out there (big props to “Viking Man” who impressed again this year with him garb and moxie at staying just ahead of me on a super fat downhill – I was at 58.5 kph/36+ mph!). 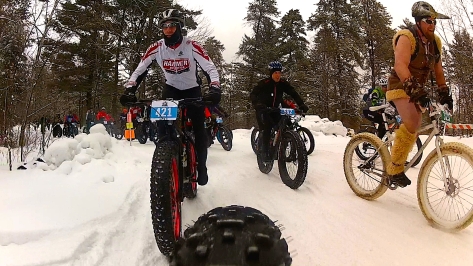 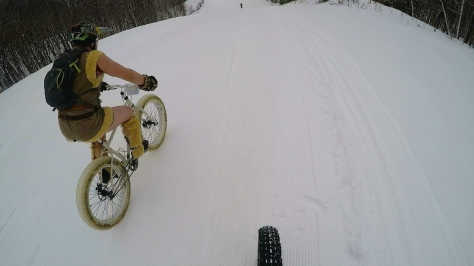 Lots could be said/pictured about the whole Birkie weekend experience, but that’s for another video/post.  For now, I’ll just say it was a blast and here’s a few pics to show you what you missed … 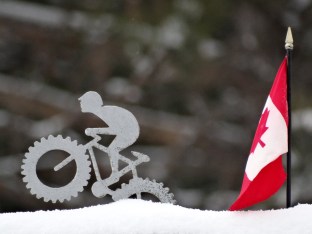 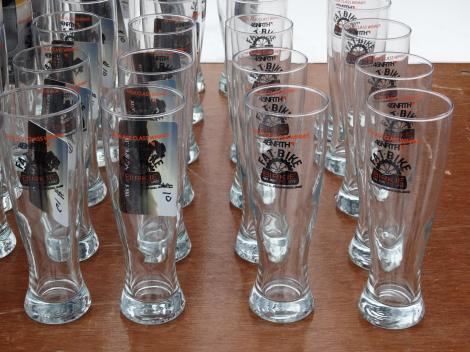 These four pics credit to the American Birkebeiner Ski Foundation: 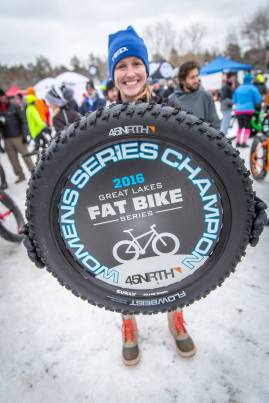 Good times on and off the race course: 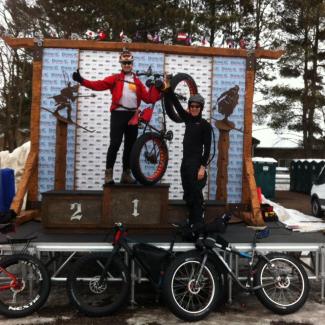 P.S. Thanks Amigo Gomez for the video share on Fat-Bike.com:
Check it our HERE AT FAT-BIKE.COM: 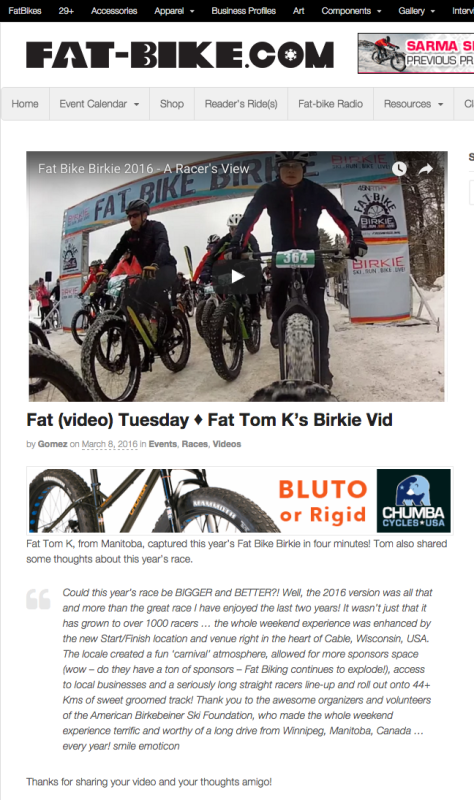 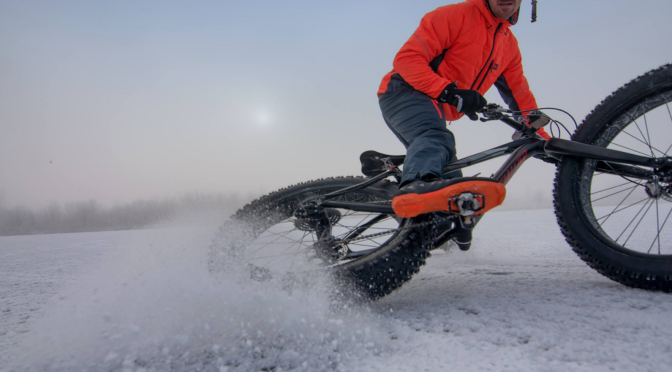 Here’s my Trailer for the 2016 Winnipeg Whyteout – Fat Forty Festival, held today 24 Jan 2016 at the Fort Whyte Alive, City Of Winnipeg Nature Park in Winnipeg, Manitoba, Canada.
Lots of great fun was had on a challenging fat bike trails with a mix of firm snow packed pathways and softer packed singletrack that required some pushing today due to recent high winds that drifted the open sections. Problem? MEH! We just pressed on and had a blast 🙂
Big thanks to Jaxon Locken of WoodCock Cycleworks, Wayne Bishop of 2 Wheel Revolution, Park City Timers, John Paige our Medic and many many volunteers and of course sponsors!
Now to begin working on a full video to capture all the fun!

Our Fat Bike Double Crossing of frozen Lake Winnipeg was a special adventure!

Five of us fat bikers decided to join the annual “Polar Bear Crossing Run” on March 10th 2013, which is a fund raiser for the Winnipeg, Manitoba, Canada chapter of Habitat for Humanity. With permission from the local snowmobile clubs, the event used the Snoman Snowmobile Trails that cross the lake from Grand Marais (the town near Grand Beach) to near Gimli, a distance of approximately 27 kms (16.8 miles) one way. 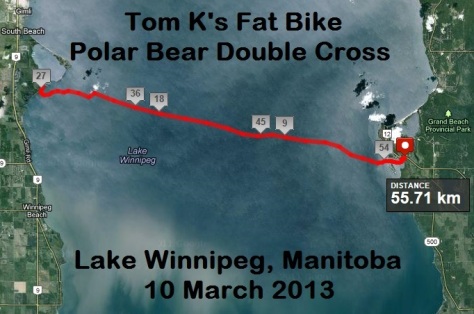 Lake Winnipeg is located about 100 kilometers (60 miles) north of Winnipeg. It is the 10th largest lake in the world by surface area and consists of a large, deeper north basin, a smaller, shallower south basin, and the “Narrows” through which waters ultimately flow northward to the Hudson’s Bay.

The innumerable drifts on top of the hard-packed, snow-covered ice started as bothersome, but quickly became a challenge for momentum. It was apparent that fat bikes with 4.8 inch wide tires and 100mm rims had a distinct advantage over the narrower versions of fat tires (I upgraded to a 4.8 inch tire Surly Moonlander soon after this ride).

The ride ended up being a tough 8.5 hour slog. Our resolve was continually tested by the drifts. Although many well-intentioned snowmobilers attempted to break up the drifts to make our lives easier, they unknowingly renovated the firm path. The result was ‘potato-mash’ snow for three quarters of the ride.

As the sky lightened, we marvelled at the view, with the wide vistas and moon-like terrain! We were entranced with what was in front of us and concentrating hard on keeping the bikes rolling smoothly. If it was easy everyone would do it.

At about 13 kms from shore, I glanced back as dawn opened to the sunrise.

The term “bathed in sunlight” became meaningful at that moment. It seemed like the sun was within arm’s reach. The vast expanse of the lake provided an amazing frame for the almighty Sun! 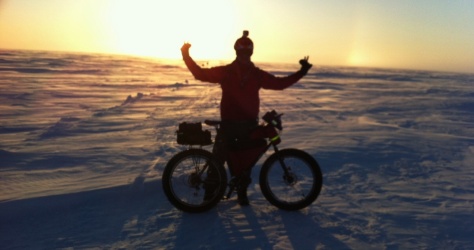 In our view, the ride was extraordinary! So I used special music for the video. Many thanks to Roger Subirana Mata for “Between Worlds”, from Jamendo.com (Public Domain).

Future crossings of Lake Winnipeg by fat bike are certainly possible, but adventurers should approach the lake with utmost respect. Lake Winnipeg is notorious for its volatile nature even in non-El Nino years. The year after this crossing was done, the event was cancelled due to unseasonably warm conditions in early March that turned the trail into slush. On the other extreme, wind constantly moves the ice, causing line cracks, pressure ridges, and frigid wind-chill values.

Around the same period of this ride in 2013, some amazing attempts were being made by fat bikes and a fat trike to ride to the south pole … Lake Winnipeg is likely the perfect training ground for such antarctic or arctic adventures. 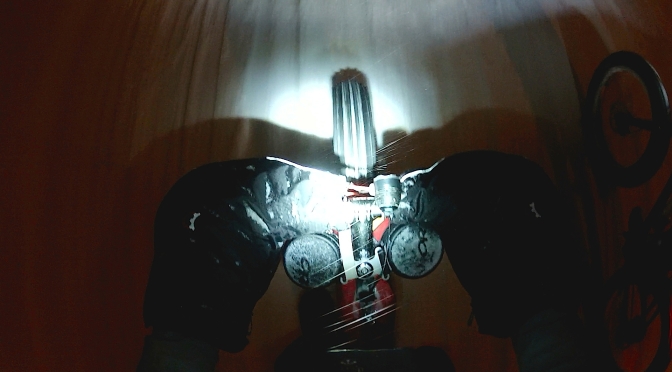 It was the day of our first real snowstorm of winter 2015-16 in Winnipeg, Manitoba, Canada … way overdue, so some of us local Fatbikers did not hesitate to get out there and lay down some fresh tracks. The result was our “Fattie Snowfest Foray”! Great fun … bring on the snow! 🙂 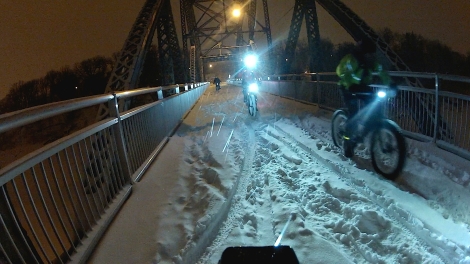 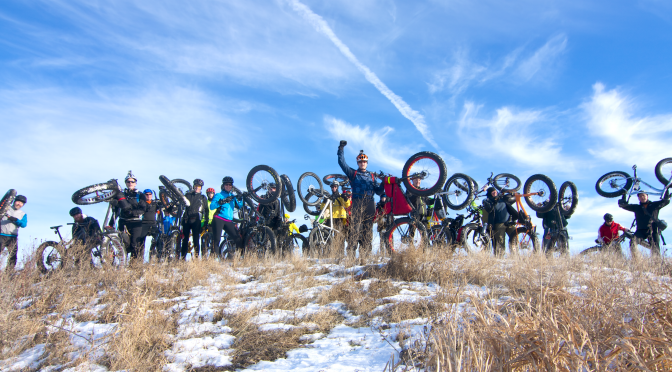 Our 2015 – 3rd Annual Global Fat Bike Day ride in Winnipeg, Manitoba, Canada was even BIGGER and BETTER than last year!

Almost 70 Fat Bikers gathered at the Forks in the heart of Winnipeg to start our GFBD ride (or joined us along the way).  Even though the weather was milder than normal (0 to +5C) we still got to ride on snow trails, but no frozen rivers and creeks this year.
Some rode a shorten route, some much longer, but all enjoyed a great day of early winter fat biking on a beautiful sunny day.
Our official photographer Gregory McNeill did the honours again on the East side of the Red River at our now standard perfect riverside spot.
This year Gregory was riding his new Fat Bike and still carrying all his cameras and tripod … hardcore tough that guy … just the way we like him! 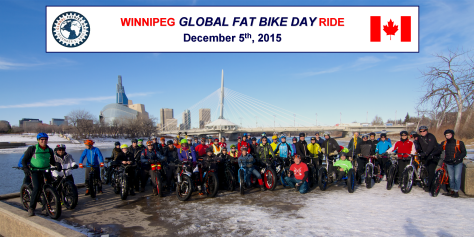 Our 48 Km route this year (after our Prologue across the Red River and back to the Forks) took us west along the Assiniboine River walkway and river=edge trails, through Wolseley, along Wellington Crescent and on the Assiniboine Park ‘Monkey Trails’ to the Park Duck Pond Shelter (no need for it this year). Then we made our way south to Fort Whyte Park via Assiniboine Forest pathways and to our 3/4 route goal of ‘IKEA Hill’ and a short steep up to another group photoshoot. 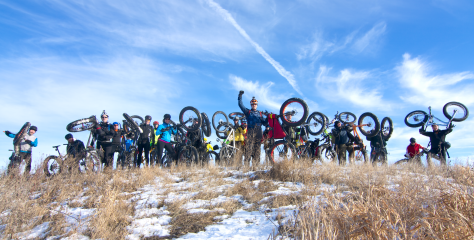 Most of the still large crew made a pitstop at the Buffalo Cafe (funny name – since we call them Bison in Manitoba and there are actual Bison at Fort Whyte Park in a large enclosure field). Onward east now took most either along the MacGillvary pathway or Bishop Grandon Greenway to the Wildwood Park area and north to the Elmpark (BDI) Bridge and the official “Casa Fat Tom’s Pit Stop … chili-fest, suds and hot ‘toddies’. Good times! 🙂 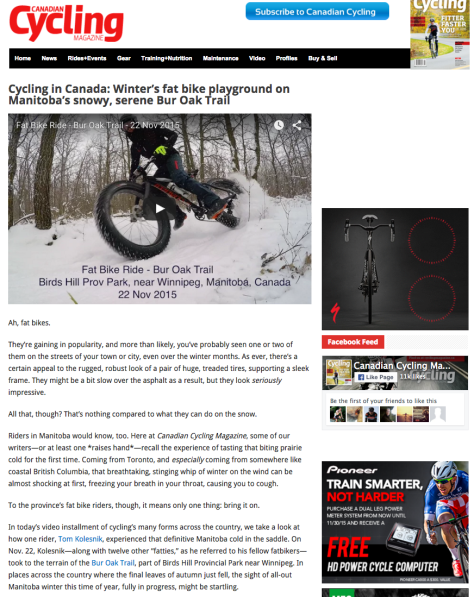 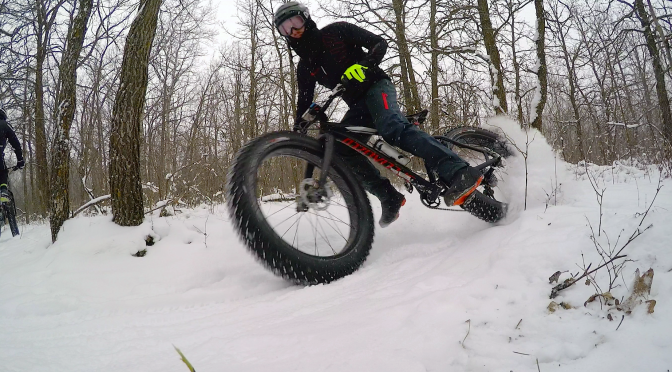 First Fat Bike single-track trail ride of the season on snow and it was a blast! Four of us put in a few laps and kept the trail packing going while new snow kept falling and then another eight ‘fatties’ joined us for more sweet fatbIking and setting the trail for later riders. 🙂 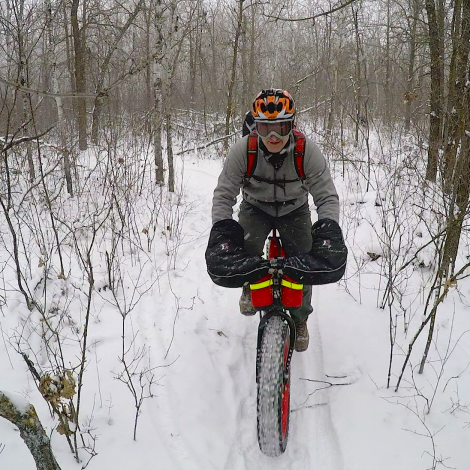 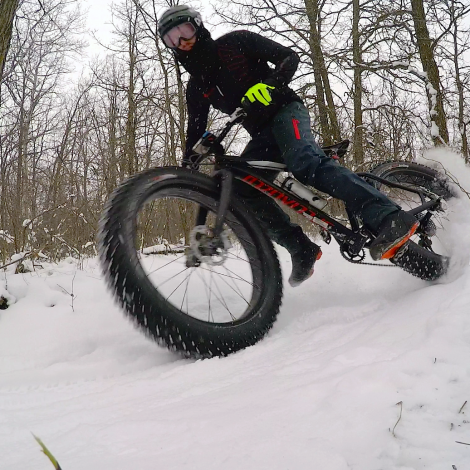 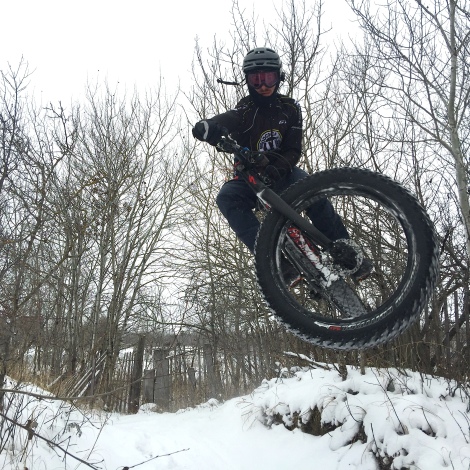 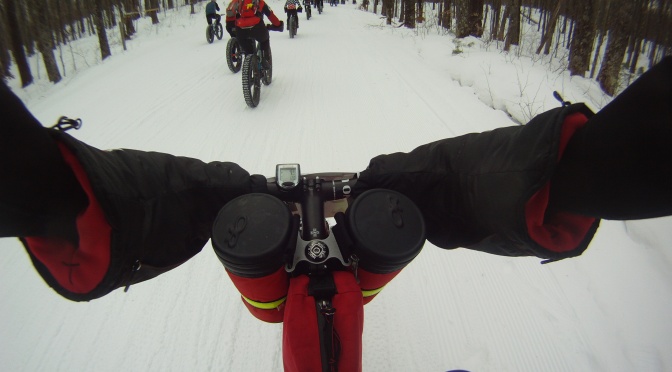 KA-POW!!! SUPER DUPER FAT BIKE RACE!
The 2015 Fat Bike Birkie Race held at Cable, Wisconsin, USA, on March 7th was once again the BIGGEST FAT BIKE RACE ON THE PLANET with over 800 registered racers (3/4s on the 47 Km loop and the rest on a 20 Km loop)!
Just like last year, it was a blast to race and capture the event on video … this year I used a $5 broomstick to raise my helmet-cam up to get a ‘high pan’ of the BIG FAT MASS of racers (slick – thanks Big J for the idea!) … kinda envious of the drone video guy though! 🙂

We had a larger group of us ‘Team Toba’ racers there this year (Lindsay G, Dan L, KC T, Jason C, Cam M & Garth M – all from Winnipeg as well as Stephen G from Selkirk).

Fat Tire Biking continues to explode around the world and no where was it more evident than this past weekend at the Birkie Ski Trails complex, with just 2 days access for fat bike racers to check out the amazing trails, in great conditions (-5 C overnight and +2 at race end), expertly groomed by the American Birkebeiner Ski Foundation and all their organizers and volunteers!
The American Birkebeiner Ski Foundation once again but on a world class race event and handled the merry mass of fat bikers!
Definitely coming back next year and EVERY YEAR! 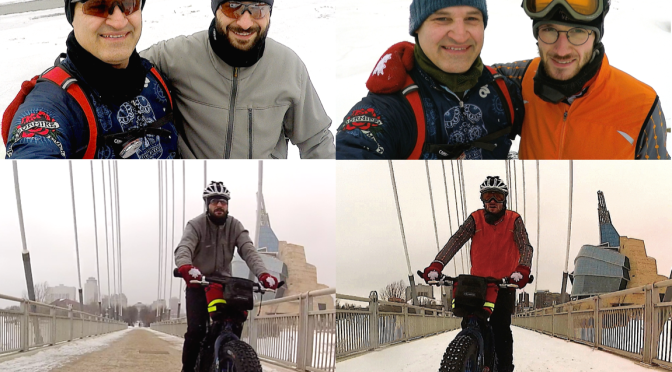 One video to bring together two great winter fatbike rides with my two sons on different days. 🙂
Brett and Jordan were able to ride with me and enjoy the same route to the Forks and back, which made for some interesting video editing to mix the rides! 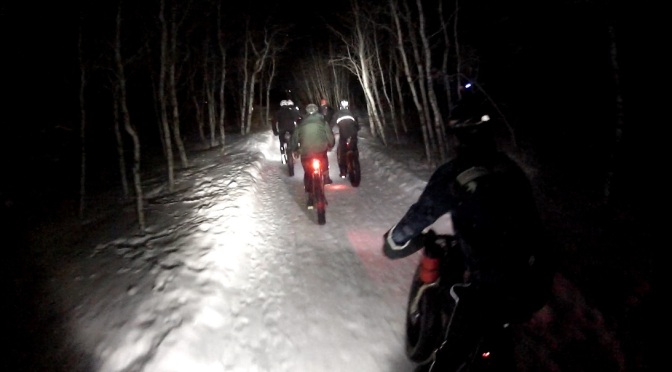 Another sweet winter night ride with a few of the Manitoba Fat Bikers and one ‘Skinny’. Check it out:
http://youtu.be/xF3B_3e0isI

The Assiniboine Park and Forest trails were super hard-packed and not a lot of snow base … great conditions for our friend Skinny Charles to join the Fatties for part of the ride.
Welcome to new fatbiker Pat on her shiny-new 9 Zero 7. Thanks to Fat Serge for suggesting the ride. 1st place Frosted Beard honours to Fat Luke, with a close 2nd place to Charles. Big thanks to Fat David for bailing me out after my Mr. Moonie’s bottom bracket seized up! 🙂

Looking Back to The Fat Snowy Nights – Ride

Actif Epica 2013 – Up Close and Personal

“Back in the Black” Winter Night Ride

If It Was Easy – Everyone Would Do It

My You Tube Channel 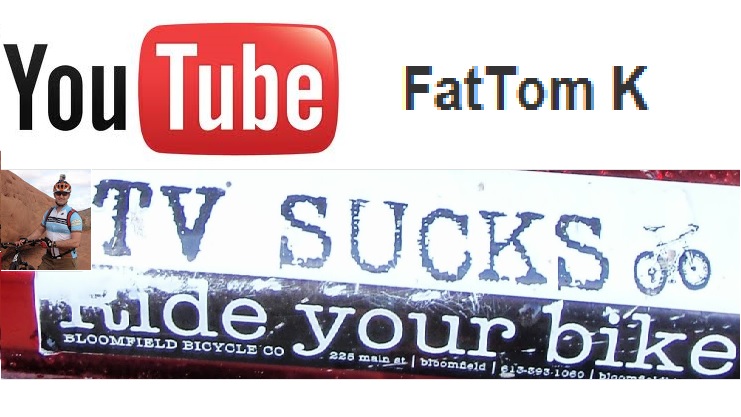